Card for my father in law 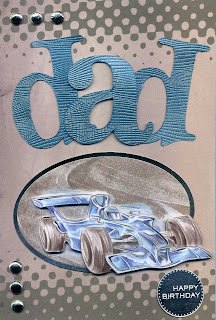 It's my father in laws birthday today and here is his card. It's quite simple but for some reason took a bit of thinking about.
The base card which you can't see is a turquoisy blue colour and I've matted another piece of patterned card picked up at Kanban on top then a bit of Formula One decoupage, I tend to alternate between Formula One and Rugby League for my fil.
The dad was cut out (using some plasma letters which I had from Craftwork Cards some time ago ) from some metallic textured card which also came from Craftwork Cards a while ago. I coloured the letters with an Aegean Promaker.
The whole thing is finished of with cards candy and a Craftwork cards sentiment. So a real Made in Yorkshire card
Posted by anne at 08:41

I really love this card for a male birthday, the car really seems to stand out.
Can you do me one for this friday??
Only joking
Kath x

anne
United Kingdom
I live in Yorkshire in the UK where I like to craft with stamps, paper, sparkly things and occasionally a small piece of ribbon. I love to play with sketches and design for Sweet Sketch Wednesday 2. 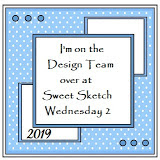